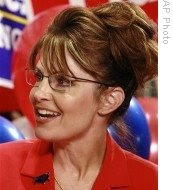 Well the Change and Hope we can believe in has had the wheels fall right off the bus thanks to a fresh new face on the political scene. Governor Sarah Palin was announced as the VP pick of John McCain and the Obama camp forgot what their campaign was about. Was this not the campaign about issues? Was this not the campaign about electing outsiders? Was this not the campaign about electing a new generation? If those of us that have supported Senator Obama wanted the same ole politics his campaign would have been dead on arrival in Springfield on that cold day 18 months ago.
Well Senator Obama I am ashamed not of you today but of your campaign staff and many of the volunteers. All the things we all stood up to and defended you over these last 18 months and said they don't have anything to do with the issues, your team pulled out and dusted off against Governor Palin. Now that YOUR staff has questioned her experience, her values, her relationships, her kids.....I have been amazed and the CRAP I have read on line and gotten directly from the campaign and campaign aides into my Indiana for Obama email loop.
Now that you have used the Swiftboat tactics you supposedly can't stand.......I think all the issues I have defended you on that have nothing to do with the issues, you now need to stand up and answer also.
1. You need to stand up and explain why you stayed with Reverend Wright for 20 years? Where you a believer or was it to give you credit in the community? Tell us.
2. What is your relationship with Father Flager? Tell us exactly?
3. What exactly is your relationship with William Ayres? You did not know his past or what he stands for some how?
4. What were your exact accomplishments as a community organizer?
5. Why did you vote Present instead of ya or nay all those times in the legislature? Was it politics, partisanship, or you just could not decide?
6. What exactly have you done to have enough experience to be POTUS if Governor Palin does not have enough experience to be VP?
Sorry Senator I have been a big supporter from day one but I saw all of what I don't like about politics from your campaign over the last few days. I have not traded sides as of yet but I will say that NOW you must answer the questions you have avoided up to now. You and your staff have brought each and every one of these issues back to life. So go take a look in the mirror and walk out your front door and answer the questions.
Peace Dude!
Posted by Jeff at 5:47 AM

Anxiously waiting to see if you get a response from McCain's camp...and what it is. You already know those questions about Obama scare me - especially all the "present" votes. What an interesting election this is shaping up to be - no matter what you have to love the increased awareness!