Press Release dated August 2, 2008:
From: Coach Bear Bryant
Subject: Assemble the team at "Bama Bridge" John Mark is coming home.
That was all the needed to be sent to the many "Bama Fans" in heaven today. With that short note a plan went into effect. With a nod from the big guy everyone knew Coach Bear Bryant was in charge of today's welcome program. After a short team meeting everyone started the process. Heavens gate would today be named "Bama Bridge" as the University of Alabama's Crimson Tide's number one fan was arriving today.
It did not take long for all the players to find their jersey's and polish those black shoes into a shine. The band members grabbed their hats and their instruments and headed for a short rehearsal. But they were missing a few sections, but no worries today some band members from other places showed up to help. Who would have thought that those sections would be filled by Irish, Tigers, Sooners, Aggies, Longhorns and Trojans but they joined the band with the pride of being from Bama today.
The professors and alums all put on their robes and their hats and all assembled at Heavens gate which is just for today called "Bama Bridge". Soon the time had arrived. There seemed to be thousands of players lined up behind "The Bear" wearing those crimson jersey's today. Could it be that every past college football great was from Alabama today?
As the time began to arrive everyone was assembled in their places. As the musicians tuned their instruments Coach Bryant adjusted his coat, tie and hat. 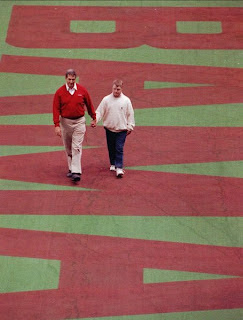 In the distance they could see Coach Bryant's legacy Coach Stallings walking John Mark across the end zone one more time.

It was then that John Mark could hear the Crimson Tide fight song growing louder in the distance. As he walked close to that sound he saw hundreds if not thousands of "bama fans" on the other side of a bridge behind some beautiful gates. As he started onto the bride he saw a beautiful sign with the simple phrase "Roll Tide" and "Welcome Home John Mark".

John Mark was greeted by Coach Bryant with a firm hand shake and a hug. "The Coach" looked him in the eye and thanked him for his years of service to the University of Alabama and "The Bryant Museum". He said "son you have been a role model and made us all proud".

With that, John Mark asked "Coach is this Heaven?" Coach Bryant, tilted his hat just a bit and said " Naw son this is Alabama, ole Rockne just thinks it's Heaven, Welcome home".

With that Coach Bryant walked John Mark through the crowd toward a beautiful stadium. The Coach looked at John, a fine specimen of a "Bama Quarterback" and said, "Come on son, we got a game to play".

Precious Jeff, but I"m gonna kick your ass. You just made me cry!

Jeff, that was amazing. Are you sending it on to Coach? I can get it through Mal Moore or Martha Cook if you aren't sending it directly.

Jeff said...
This comment has been removed by the author.
6:27 PM

Thank you Jeff for your comments. We are all proud of our loyalties but it's important to keep it all in perspective. I think John Mark gave us perspective.
God bless you and your family Jeff and welcome home John Mark.

Nice job stop by my blog too cear yourself up. I have something that belongs to you

I know nothing about football(?!)BUT, I do know that this was beautiful. I clearly pictured all of this occuring! You have a gift my friend, I hope for sure that you somehow got a copy of this to John Mark's family! I will keep them in my prayers.