Tough Questions with no answers! 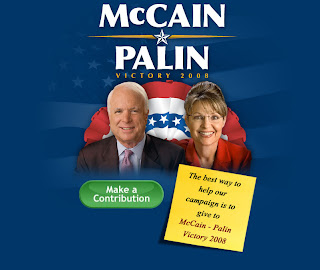 Well I have spent the last few weeks wrestling with myself over the national campaign. I have been supporting Senator Obama since day one but became somewhat frustrated with the Change we Can Believe in during the Clinton negotiations before the convention. Then all went well at the convention and I was happy again. Then Senator McCain came out with the gutsy decision to name Governor Sarah Palin as VP. This really made me take a step back. Governor Palin is an awesome example of what my old Republican Party was all about. Yes I use to be a rabid Reagan Republican. And the fact that like me she is the parent of a child with Down syndrome has made me really reflect.
Well I was willing to be swayed back but I had two tough questions for the Campaign both 100% issue based.
1. How will Senator McCain's health insurance policy benefit my family? You see we have really good employer sponsored health insurance and most of the decisions we make are based on that coverage. Why....well Nash does not have any health issues any different than you or I but because he is diagnosed with Down syndrome he can't get a stand alone health policy from any carrier. The only way he can get coverage is through a group plan or the state high risk pool. So if Senator McCain's plan goes into effect and we would lose our group and have to go out into the market for an individual policy we would not see any savings but an increase of 40% or more for our family's coverage in the high risk pool.
2. In 1975 Congress passed IDEA and promised to fund up to 70% of the additional costs to schools for providing services to allow students with disabilities to attend public school with their peers. To date they have never funded more then 17% of the additional cost. Senator McCain has a record here of not supporting increased funding for IDEA or NCLB. So I ask since Governor Palin does have a record on increasing funding for Special Education in Alaska how would this effect the campaign on this issue?
Well I emailed the McCain/Palin Campain over 10 days ago and asked for answers on these two questions so I could make my final decision on who I would support. To date I have not even gotten a politically typical thanks for your email but we are really busy response. No response at all....no answer to my question.....no email or call asking for a donation and yes I gave them all my contact information. (side note I have done the same with the Jill Long Thompson campaign with the same results) (side not two Governor Daniels and Dr. Tony Bennett have gone out of there way to answer my questions)
My conclusion is the questions on these issues were not worth answering or they did not like their own answers.
For me these are the two most important issues of the campaign.
So I wish you luck Senator McCain and Governor Palin and I think you are both really great people and great Americans but if you can't answer my questions on the issues.....I have to stay in the camp of:
"Change we can Believe In"
But I am still open to having the discussion on these two issues.
Any of my readers have any thoughts?
PEACE DUDE!
Posted by Jeff at 7:04 AM

Their websites speak pretty strongly to issues regarding all disabilities, as you already know. I did find two random paragraphs on Autism tucked into McCain's page, but that was it - compared to a pretty comprehensive plan from Obama. Strange that they didn't even auto-reply to you with a generic thank you. I love your quote "...or they did not like their own answers."